I never much liked modern dance when growing up. Once I remember arriving at Lincoln Center too late to get in to see Martha Graham’s company perform. We watched her on a TV set from the lobby and it all felt cold and very far away. Another time I saw Merce Cunningham’s troupe perform at Westbeth, a loft on the lower west side of Manhattan, and was left feeling like a private ritual had been performed in front of me, one that was not to be understood by the uninitiated.

Recently, through a series of lucky coincidences, I have been able to see quite a bit of contemporary dance, and have this time around felt invited in, given the keys, spoken to, so to speak. This, in and of itself, has radically changed my attitude toward dance. 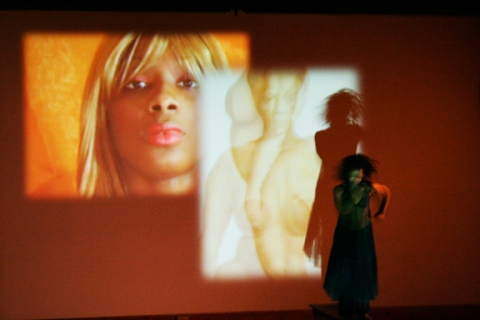 And seeing dance in such an intimate space as Mt. Tremper Arts, where there is not even a formal separation between audience and performers—in which some audience are sitting on the same floor that the dance is taking place on–brings the experience that much closer. While I used “being spoken to by dance” as a metaphor earlier, in fact, that is what happened in at least one of the five pieces performed at the closing of Mt. Tremper Arts’ inaugural Summer Festival of 2008.

In Ariane Anthony’s “Where is My Pumpkin?” a performer (also the choreographer) spoke. For me, an interesting, welcome and perhaps slightly perplexing act for a dancer to engage in on stage. The performer bore little resemblance to my stereotyped notions of a graceful dancer, neither in dress nor in comportment. Her hair was painfully “Heidi”, her dress huge and awkward and she goofily looked for, mooned over and told the story of her lost/stolen pumpkin using movement that parodied “dance.” Her speech wasn’t exactly making contact with us, but it served to expand the notion of what happens in a dance piece, of how story and movement can be used and because of the humorous and self-deprecating aspect of this performance, it tore down the wall between performer and audience in a big way.

In the two pieces by Monica Bill Barnes, who was both the performer and choreographer, an extremely high level of technique and control were on display and I found myself so drawn into the performance that it taught its language to me without my having to find it. Her movement was alternately lyrical and “dancerly” and then would be punctuated by a kind of stop motion in which she’d sink to the floor into a very organized shape—in one instance a pose reminiscent of the yoga posture known as pigeon. The punctuation was usually in sync with a part of the soundtrack, and was folded so seamlessly into the more fluid parts of the dance that its emergence felt like the back story seeping out for a second—like a dancer with mild Tourette’s syndrome. This became more pronounced in her second piece in which a singer sounding a lot like Dean Martin sang about Vegas and Barnes’ punctuated movements more and more mirrored those of a boxer receiving a blow from beneath the chin. Eventually the back story took the foreground and Barnes became a drunken and defeated fighter. The precision and expressivity of her body was flooring.

Likewise the other three pieces intrigued with the way they engaged me in creating their meaning. In the first piece by Magnetic Laboratorium, as a live opera singer blasted us with his deep baritone voice, blue and orange lighting diffused large areas of the stage, alternating in a crazy rhythm that nevertheless seemed to make some kind of aesthetic sense. In another piece by Enrico Wey, a lovely snippet of narrative, which seemed particular to the digital age emerged: pinned to a clothesline stretched diagonally across the stage were four swatches of very long synthetic grass. As a performer walked across the stage, another used pulleys to move the grass so that it became a backdrop for the walker. The dancer took a walk through a grassy meadow. In the final piece by Shani Nwando Ikerioha Collins, the dancer/choreographer stood on a wooden bench in a diaphanous gown, turning slowly as anthropological (and sometimes racist) images of black women were projected over her and the wall behind her. The evening ended with an open dance party. I look forward to next summer.