A Greek king abandons his war-torn country and seeks shelter aboard the Argo, disguised as a squire. Pursued by his forsaken fiancée and her coterie of nymphs, the Argonauts set up camp outside a nearby cave, where a fresh spring flows. Suspecting the king’s presence, the nymphs threaten the men with capture should any of them dare to enter their sanctuary. The false squire is sent to the cave for water. Fearful, he sends a younger man in his place, who meets with a terrible fate. Alas, The Nymphs is the first section of John Jahnke’s Men Go Down, an ambitious trilogy combining the construction of Greek drama with fairy tale sensibility to examine the ramifications of antique guilt infesting our modern conscience.

John Jahnke is a New York-based artist, playwright, and director of theatre and film. He is the artistic director of Hotel Savant, a theatre company exploring the livid, the uncertain, the magical and sublime: the seminal ideologies of history and mythology and their impact on contemporary performance. 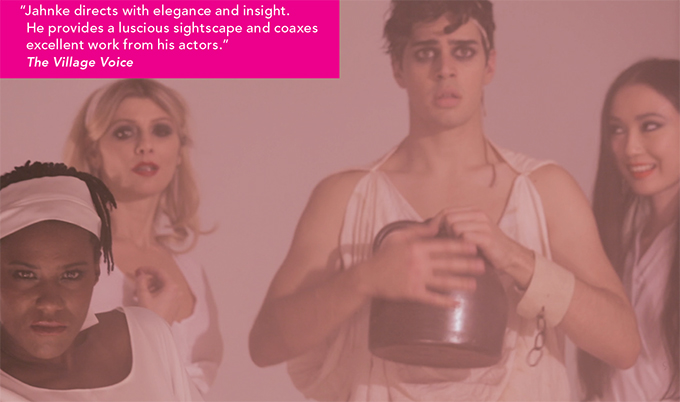 Alas the Nymphs was written at The MacDowell Colony. The trilogy Men Go Down has been developed in residencies at The Park Avenue Armory, Abrons Art Center, and the Lower Manhattan Cultural Council. Alas the Nymphs will premiere as part of Brooklyn Academy of Music’s Next Wave Festival 2015. Fennesz's score commissioned and made possible through the Austrian Cultural Forum New York.