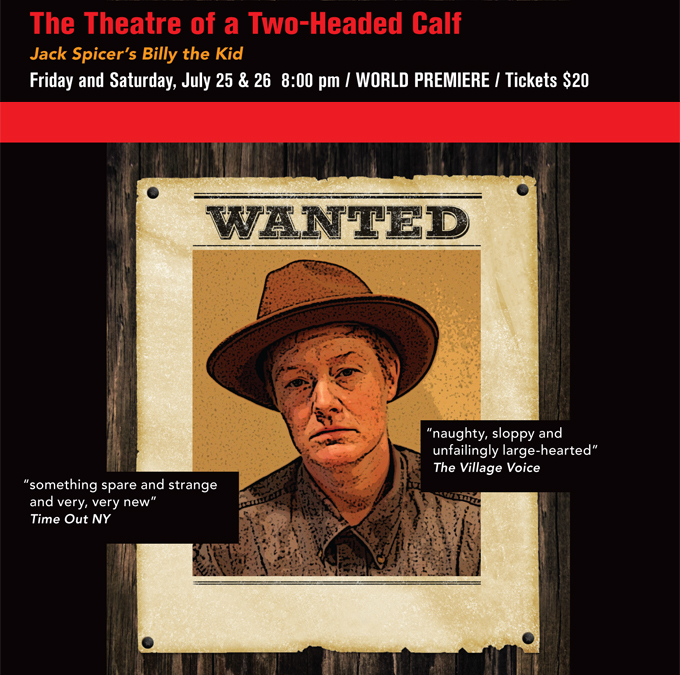 Outlaws are conjured and liberated in a performance inspired by San Francisco Renaissance poet Jack Spicer’s 1958 poem Billy the Kid. Aliens, aliases, and renegade desires (both poetic and sexual) possess five characters over a long night of drinking, singing, and seeking. Manifestos are subverted/inverted/perverted in search of a language that can queer their world. Under the direction of Brooke O'Harra, SPICER brings together a host of longtime The Theatre of a Two-Headed Calf collaborators, including performers Becca Blackwell and Laryssa Husiak, to theatricalize “a poem somebody could hide in/with a sheriff’s posse after him.”

Brooke O’Harra is a freelance director and cofounder of the Obie award-winning Theatre of a Two-headed Calf and has developed and directed all of their productions.

Composer and sound designer Brendan Connelly is cofounder of The Theatre of a Two-headed Calf and a longtime collaboration partner of PearlDamour, an Obie award-winning interdisciplinary performance company. He has received awards from NYSCA, NYFA, the New York Innovative Theatre Awards, and New Music USA.

Lisa D’Amour is a playwright and co-artistic director of PearlDamour. She was a finalist for the 2011 Pulitzer Prize for Drama, won the 2013 Obie award for Best New American Play, and is a 2013 Doris Duke Artist.