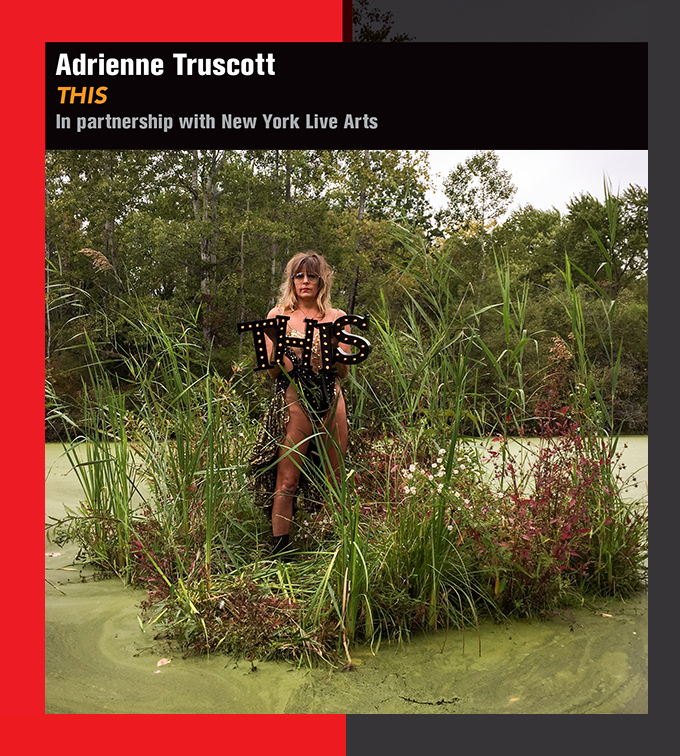 Adrienne Truscott made THIS.

THIS is a solo performance which may not always be a solo.

THIS is a small or large or medium act of artistic survivalism and an ever-evolving work that writes, in real time, the libretto of the performance the artist is attempting to do which changes with each performance to reflect the new context brought by the performance at hand.

THIS is a run-on sentence.

THIS is a grift.

THIS is a piece of cake.

Adrienne Truscott has been making genre-straddling work in New York City and abroad for over 15 years. She is a choreographer, comedian, writer, and one half of the boundary-busting cabaret act The Wau Wau Sisters. Her critically-acclaimed Adrienne Truscott's Asking For It: A One-Lady Rape About Comedy Starring Her Pussy and Little Else! won the Edinburgh Comedy Awards Panel Prize and is considered a critical impetus to the evolving conversation about rape culture. Truscott is a 2017 Adelaide Fringe Artist Ambassador and a recipient of the Doris Duke Impact Artist Award and the Malcolm Hardee Award for Comic Ingenuity. A contributing writer for the Guardian, her essays have been published in two Australian anthologies, Between Us: Women of Letters and Doing It: Women Tell the Truth about Great Sex. THIS premieres at New York Live Arts in April 2017. Wild Bore, a commissioned collaboration, premieres at Melbourne’s Malthouse Theatre in May. As an artist, she wears many hats and is attracted to the possibility of failure as a mandate for rigor.

"Truscott is always a step ahead … with firecracker wit, sophistication, and luminous humanity."—Guardian (UK)

“Truscott is confrontational, needling, and hard-hitting, while remaining stiletto-sharp and biting." —The List (UK)

This performance is supported by the Live Feed creative residency and commissioning program with support from the National Endowment for the Arts and the New York City Department of Cultural Affairs.